NASCAR's 49-race 1966 Grand National season hit its halfway point with the East Tennessee 200 on the half-mile Smoky Mountain Raceway. The track was located in Maryville, TN - just south of Knoxville. The 26-car field was missing a key, regular driver and included a local driver racing on his home track. The missing driver was The King, Richard Petty. Six days earlier, Petty's 43 Plymouth blew a tire and pounded the wall at New Asheville Speedway. The wreck damaged the car enough that Petty had to skip races in Spartanburg, SC and at Smoky Mountain as Ol' Blue was rebuilt.
The local racer looking to make an impact was Jim Hunter. Many fans are familiar with the Jim Hunter who worked for Darlington Talladega, wrote as a journalist and publicist, served as a NASCAR executive, and was passionate about racing history. The Jim Hunter at Maryville; however, was a local late model sportsman racer at Smoky Mountain. The 1966 race was his second of five career Grand National starts. Four were on his home track, and the fifth one was just up the road at Bristol.
Tiger Tom Pistone won the pole in his independent Ford. He was flanked by another local racer, Paul Lewis. Rookie of the Year challenger, James Hylton qualified third, and David Pearson and Big John Sears rounded out the top five starters.
Pistone seized the lead at the start and began his domination of the race. Lap after lap, Tiger pulled the rest of the field around the half-mile, dirt track.
Hunter's shot at running with the big dawgs was short-lived. Overheating issues after only eight laps sent his Ford to the trailer before he could even work up a good sweat. Two laps earlier, J.T. Putney - another driver from relatively close to the area in Arden, NC - parked his Ford with engine issues.
The engine issues experienced by Hunter and Putney turned out to be a harbinger of things to come for a third driver - the lap bully Pistone! After leading 72 consecutive laps, Tiger's engine began overheating. He headed disappointingly to the garage, and Pearson assumed the lead.
With Petty at home and Tiger on the trailer, Pearson went the rest of the way unchallenged. He led the remaining 128 laps and won his 21st career race by two laps over second place Buck Baker. Lewis had a great night with a P3 finish. He backed it up by winning Maryville's second 1966 race in late July. 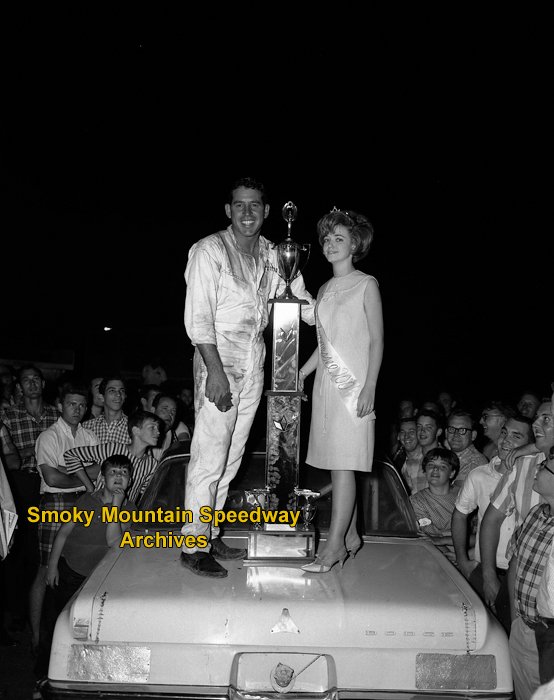 After missing two races, Petty returned three days later. He wore 'em out in winning the Fireball 300 from the pole at Asheville-Weaverville Speedway.
The track remains in operation today though it is now known as Smoky Mountain Speedway. Hunter was inducted into the track's hall of fame in 2014.